I'm going to study in here how POCs interact in this setup, DC input: 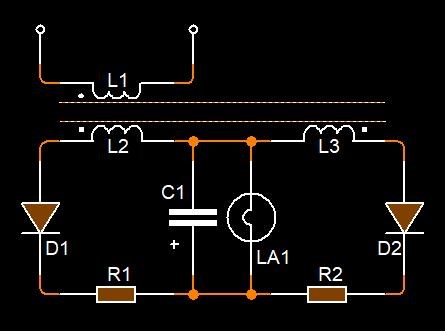 POCs are both CCW. Yellow will be the POC1 current and pink will be POC2 current. Blue will be input gate signal. Dark blue will be the output voltage.

In this experiment, L1 has 20 turns + some length of wire kept as a reserve for winding more turns. POCs consist of 200 turns. 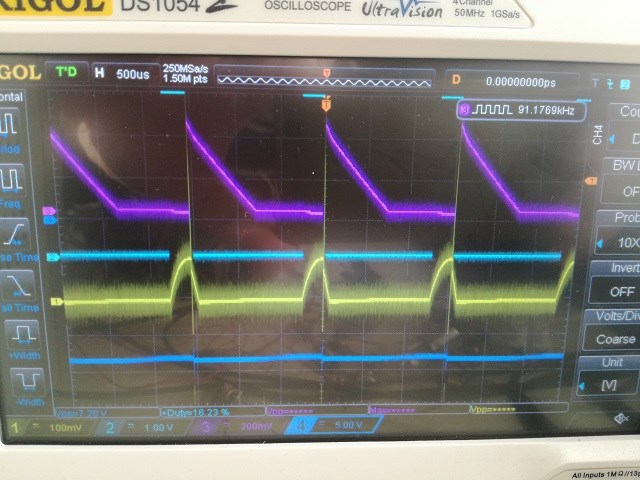 Notice the slow rise of the POC1 current. Duty cycle is 16%.

My apologies for the quality. It was a very sunny day.

What if I remove the extra wire and keep L1 of 20 turns: 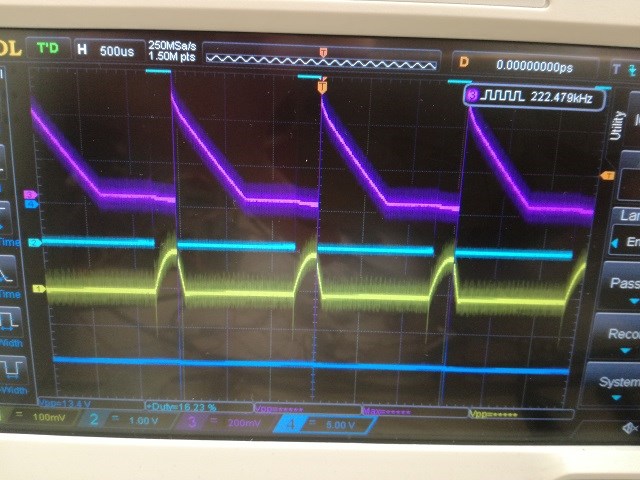 There is virtually no effect.

I'm going about this the wrong way. L1 cannot be built based on my stomach.

I know that the core is AMCC 200, Hitachi . The permeability of the alloy is: 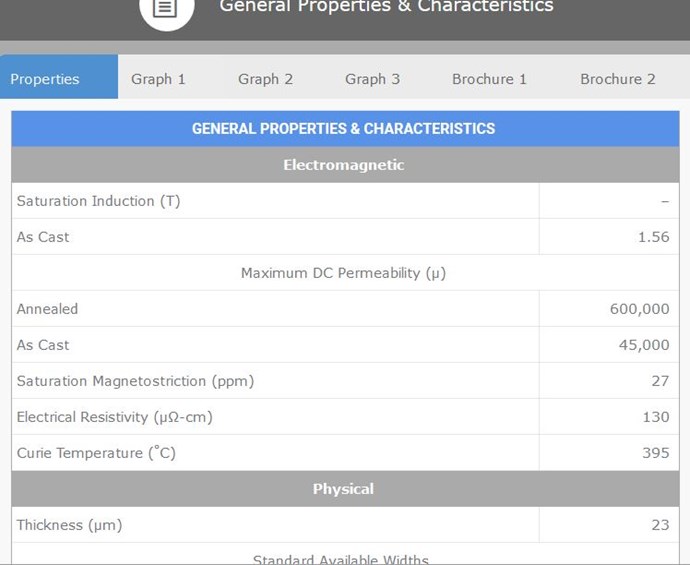 So I opened up the awesome AU calculator written by my buddy, Chris. I know that I need to stay below 1.56 T, but not too much below:

L1 of 4 turns should do the job more efficiently. I need just 2% duty to make the core come close to saturation. Let's see: 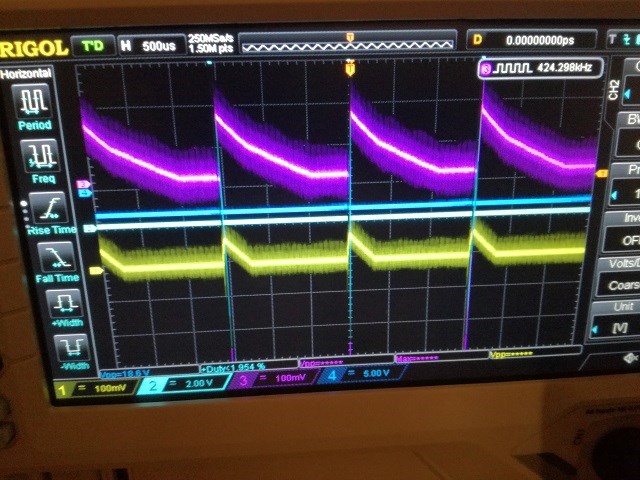 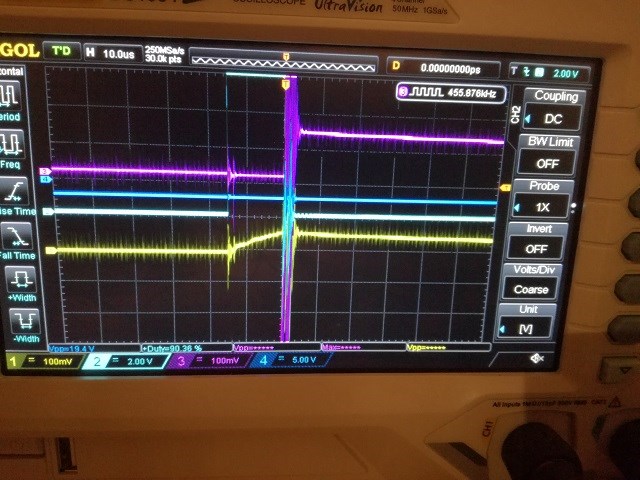 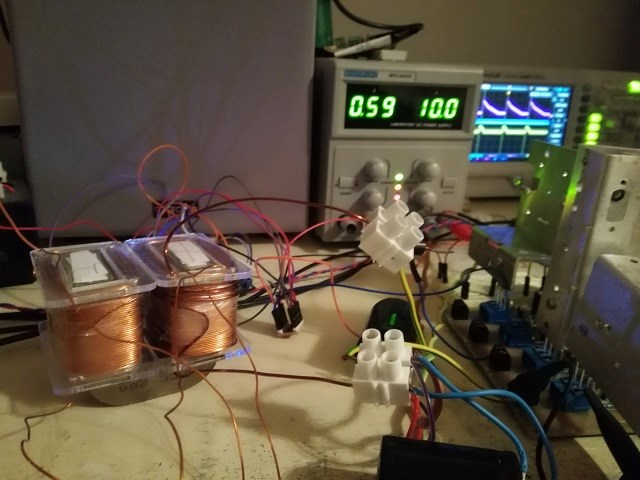 Much better, but it's still not what I have in mind.

I repeated the experiment with the 4 turns in L1 very loosely wrapped. The result was similar. I don't think I can do anything to L1 to get a faster rise time in POC1 current. This is the limit of L1. 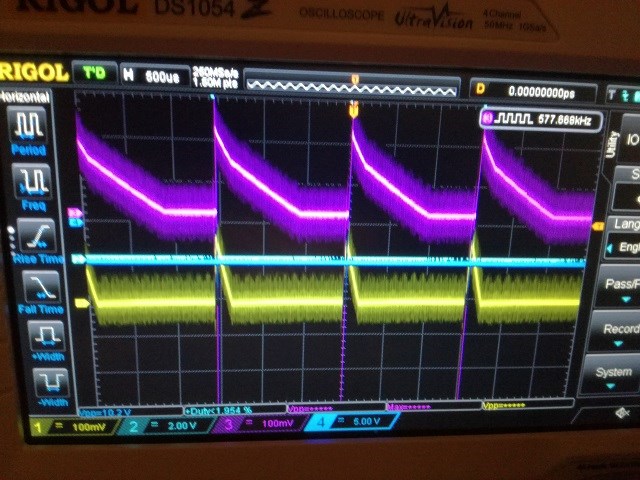 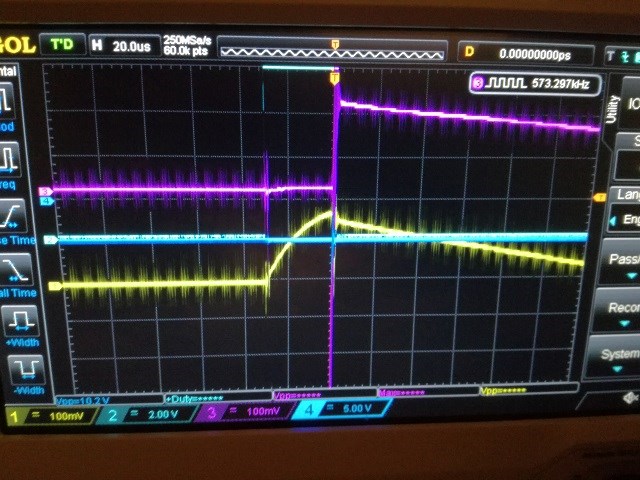 I see POC1 current is going up twice. It's still not fast enough. This looks like it's strictly a matter of POC1 inductance.

These are questions I wish to find an answer for. I have no knowledge about antennas, but I'm willing to learn.

I'll start from the beginning:

The way I see it, its only my analogy.

Try to think of each Partnered Output Coil as a RLC Resonant Tank Circuit, like this: 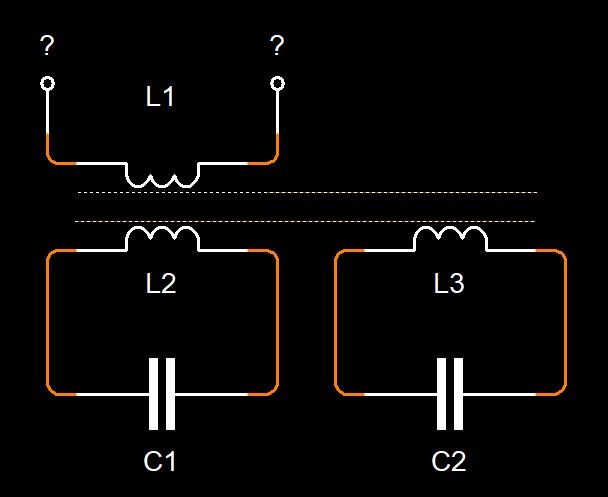 If L2 and L3 are identical and C1 and C2 are Identical, would it be best to drive L1 at Quarter Wavelength of the Resonant Frequency of the RLC Networks to get the m to resonant at 180 degrees from each other?

What are the best methods of making L2 and L3 run at their Fundamental Resonant Frequency from an external source?

All you questions are making me think about the Mr Preva experiment. Please give me some time to work on the answers as I need to experiment. I promise I'll be back.

My Friend, you are wise!

If I use the term: "Resonant Electromagnetic Induction" and show you this image:

Now, we know this comes from Wikipedia. We also know this image and description is wrong! We know Electromagnetic Induction as Science understands it is Wrong and Wikipedia shows it Wrong!

We know better and have shown many hundreds of times here why this is wrong!

The article gives you a lot of good information however:

The WiTricity type magnetic resonance is characterized in that the resonant coils on the primary side and the resonant coils on the secondary side are paired. The primary resonator increases the primary driving coil current and increases the generated magnetic flux around the primary resonator. This is equivalent to driving the primary coil at high voltage. In the case of the type on the left figure, the general principle is that if a given oscillating amount of energy (for example a pulse or a series of pulses) is placed into a primary coil which is capacitively loaded, the coil will 'ring', and form an oscillating magnetic field.

Resonant transfer works by making a coil ring with an oscillating current. This generates an oscillating magnetic field. Because the coil is highly resonant, any energy placed in the coil dies away relatively slowly over very many cycles; but if a second coil is brought near it, the coil can pick up most of the energy before it is lost, even if it is some distance away. The fields used are predominantly non-radiative, near fields (sometimes called evanescent waves), as all hardware is kept well within the 1/4 wavelength distance they radiate little energy from the transmitter to infinity.

The energy will transfer back and forth between the magnetic field in the inductor and the electric field across the capacitor at the resonant frequency. This oscillation will die away at a rate determined by the gain-bandwidth (Q factor), mainly due to resistive and radiative losses. However, provided the secondary coil cuts enough of the field that it absorbs more energy than is lost in each cycle of the primary, then most of the energy can still be transferred.

Because the Q factor can be very high, (experimentally around a thousand has been demonstrated with air cored coils) only a small percentage of the field has to be coupled from one coil to the other to achieve high efficiency, even though the field dies quickly with distance from a coil, the primary and secondary can be several diameters apart.

The great Nikola Tesla's 1/4 Wavelength work is worth studding more to get a better understanding.

capacity and self induction uniformly distributed along the axis of symmetry of wave propagation and transmitting slow electrical oscillations without sensible distortion and attenuation.

Besides the above three requirements seem to be essential to the establishment of the resonating condition.

First. The earth’s diameter passing through the pole should be an odd multiple of the quarter wave length – that is, of the ratio between the velocity of light – and four times the frequency of the currents.

Second. It is necessary to employ oscillations in which the rate of radiation of energy into space in the form of hertzian or electromagnetic waves is very small. To given an idea, I would say that the frequency should be smaller then twenty thousand per second, through shorter waves might be practicable. The lowest frequency would appear to be six per second, in which case there will be but one node, at or near the ground-plate, and, paradoxical as it may seem, the effect will increase with the distance and will be greatest in a region diametrically opposite the transmitter. With oscillations still slower the earth, strictly speaking, will not resonate, but simply act as a capacity, and the variation of potential will be more or less uniform over its entire surface.

Third. The most essential requirement is, however, that irrespective of frequency the wave or wave-train should continue for a certain interval of time, which I have estimated to be not less then one-twelfth or probably 0.08484 of a second and which is taken in passing to and returning from the region diametrically opposite the pole over the earth’s surface with a mean velocity of about four hundred and seventy-one thousand two hundred and forty kilometers per second.

The earth’s diameter passing through the pole should be an odd multiple of the quarter wave length – that is, of the ratio between the velocity of light – and four times the frequency of the currents.

I think this information is very handy to know about, but is it critical to what we are doing? I would not think so, not exactly, perhaps close to or similar ideas are important, following the same sort of ideas is one way to say it.

Admin
Chris posted this 5 weeks ago

There you have it! Great Minds think a like! The video posted by chocolate blanco is the video I was looking for:

This is an Assistive process! The input is Reinforced by one of the Partnered Output Coils.

I would add some addition to what has been left out above.

On amplifying waveforms.
During antenna development measurements, János Vajda noticed that in the case of certain reflective surfaces the output power improved in an interesting way. This effect was thought by his colleagues to be a measurement error, and only his perseverance and consistency allowed him to explore step by step, to understand the essence of the effect. The effect is in principle very simple. If we take two radiation sources, such as a radiating antenna, which are very close to each other, if both sources emit a signal of the same phase and the same amplitude and the same wavelength, they radiate energy into their environment by amplifying the wave from the two sources. they extinguish each other.
However, if we design the cavity in which this interference phenomenon occurs cleverly enough, we will get extra energy: Of course, tuning the system can also result in a state of pure energy loss, i.e. there will be more extinction than wave amplification.
This was also presented in a presentation with an efficiency of about 120%
In the video, it sounds at 23:45. An English translation can be heard in some places.

His description (which is complicated for me) can be found here:

I did a similar study earlier than what is shown here in this video. Visible from 18:45.

I promised, I'm back

. Thanks to @Chris and @Atti. You posted some very good information and I needed some time to understand.

What are the best methods of making L2 and L3 run at their Fundamental Resonant Frequency from an external source?

One of them should be 1/4 wavelength as you suggested. I think this is the right place for this video:

@CD - Nice work, Thank You for Sharing! You are  Spot On My Friend!

As per our conversation, the following Image: 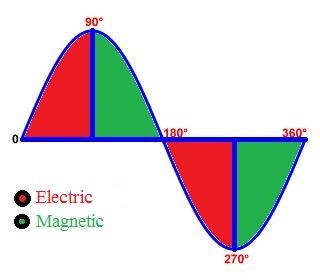 This image shows the Transition of Energy:

All Inductor's have the following characteristics:

Resonance in an Inductor uses all the above LC and R, thus the term LCR Resonance. The following videos are good explanations and one with good graphics:

So we must think, at 1/4 Cycle, we have a System that is entirely Magnetic Energy, converted from Electric Energy. Adding more Electric Energy is pointless beyond 90 Degrees. We can not gain anything beyond the 90 Degree point. Because, at this point, all the time has past for the to increase Amplitude for the given Charge Q from the Capacitor C.

The same is true at the 270 Degree mark.

All Inductors that are Resonant, Transfer Energy from Electric to magnetic and back to Electric and so on.

We see why we might want to look at the 1/4 wave resonance now. Why this 1/4 wave is a good path forward. Remember, maximum amplitude for minimum input. 1/4 wave also means approximately 1/4 wire length.