A self-fueling perpetual-motion machine of the Prophets

American born prophet, Edgar Cayce, is one of the most accurate prophets ever!

A self-fueling perpetual-motion machine will be discovered

Perhaps with the current focus on renewable resources and energy conservation, we will see Cayce's prophecy of a self-fueling perpetual-motion machine come to pass in our lifetimes. In an article by Alison Ray entitled "Edgar Cayce's Perpetual Motion Machine," Ray described Cayce's quest to build a motor capable of providing power for the whole world. Beginning in February 1928, Cayce met inventor Marion Stansell, who had a near-death experience while stationed in France during World War I. During the experience, a "spirit guide" escorted him to another dimension where he was given blueprints for a revolutionary motor. He was told that this motor would save the planet from environmental destruction in the next millennium. The motor was designed in the spirit realm by DeWitt Clinton, deceased governor of New York, who was largely responsible for the construction of the Erie Canal.

In hopes of building the motor, Cayce introduced Stansell to Tim Brown, an auto parts manufacturer from Detroit, and Morton Blumenthal, a New York stockbroker and friend of Cayce. Over the next few months, Cayce gave a series of readings on what was called a "perpetual motion machine" that once started could continue to run indefinitely "by creating energy of its own source." The hope was that money generated from this invention could fund the future work of Cayce's Hospital. On March 8, 1928, Cayce gave a reading during which he answered important questions about the machine:

(Q) "You will have before you the gasless motor invented by Marion Stansell." (A) "Yes, we have the body and enquiring mind of Marion Stansell, also the associations and those conditions surrounding the perfection of motor which will develop power in its own action. As has been given, the idea and the plans as have been worked out in part along those lines that pull more of the power as produced in compression in drum, with the leads made in these forms that gather vibrations from the air as is forced through drum, are, as we find, the better application of the created energy. In the cams as have been used too much slack or play is allowed in their rotation. This is in the drum's head action that these must be shortened in play. The connection of Tim Brown and Morton Blumenthal with same -- best that these have Stansell's operations closer under their observations when the completed product is near attained." (Q) "How may we bring him under our observation?" (A) "Bring him to... Ohio or N.Y." (Q) "Is this machine the same as brought to Washington now by Charles Lindbergh?" (A) "No. As is here, the Stansell machine would operate on stationary conditions impelling forces; even for now that in gas motors -- for, as tested by others, has more to do with that thrown in air and gaining its impelling force from that source." (Q) "Would it operate perpetually if perfected?" (A) "Not perpetually, but once started could be kept in motion by created energy of its own source. Other has to have some source of impellation." [Edgar Cayce reading 4665-1]

A reading for Tim Brown on April 7, 1928, confirmed that the group had indeed understood the instructions and would be able to demonstrate the motor in the patent office as well as explain how the machine works while filing a patent. The theory of how the motor worked was recorded in the Reports:

"Theory of Motor Working: The phrase 'getting something from nothing' is incorrect -- for we know there is no such a thing as nothing. We do know that everything is a force or some form of energy. We do not know the relation of these forces of energy to each other -- or, in other words, the Relativity of Force -- but we can assume that this relationship exists. Therefore, in the case of our motor, when we look at the two substances, water and air, we look at them as forces, and by using a mechanical contrivance to accentuate and retard these forces at the right time it is possible to utilize the resultant force or Component force. This is what has been done in Stansell Motor." [Report of Edgar Cayce reading 195-51]

It was an unlikely partnership, and there was distrust amongst the group, but Cayce continued to give readings for the trio, trying to explain the details required to build the motor and provide the answers to numerous questions about diagrams that were created by the group. The readings touched on the topics of vibrations, the theory of relativity, gravitational forces, and more. While working on the motor, a letter from Brown indicated:

"Though the law of relativity which the machine demonstrates will for a time upset some of the present scientific statements..." [Report of Edgar Cayce reading 195-56]

Initially, two motors were built, one for test purposes and the other one (a smaller size) to be used at the patent office when the application was made for a basic patent. Further readings suggested changes to the design and the reports suggest that it was rebuilt several times. However, the motor was never completed or fully operational and the project was abandoned. In March of 1973, a letter was sent from the Cayce Foundation to Stansell's daughter after he died. A new team of researchers was looking for copies of the original designs or the patent application from Stansell's files. The daughter responded that her father had worked on the motor until he died 10 years prior. She added, "As far as anyone knows no papers were ever found. It does seem a terrible shame." According to the Cayce Foundation, there are still individuals working on building a motor based on the readings of Edgar Cayce.

NOTE: the reference to Major Charles Lindbergh reference above is Lester Hendershot Motor.

I find this interesting! What we are doing is based on the Electromagnetic "Generator". Of course a "Generator" is just a Motor in reverse! The same rules apply!

If anything can be learned from what is written above, it is that, that of Energy can not be Created nor Destroyed! We MUST have another Source, which is exactly what we have done with the Third Coil, thus giving us Partnered Output Coils, an Asymmetrical System!

As we have discusssed, Force must be thought about. This was pointed out above:

The phrase 'getting something from nothing' is incorrect -- for we know there is no such a thing as nothing. We do know that everything is a force or some form of energy. We do not know the relation of these forces of energy to each other -- or, in other words, the Relativity of Force -- but we can assume that this relationship exists. Therefore, in the case of our motor, when we look at the two substances, water and air, we look at them as forces, and by using a mechanical contrivance to accentuate and retard these forces at the right time it is possible to utilize the resultant force or Component force.

the agency producing a magnetic flux, considered analogous to the electromotive force in an electric circuit; equal to the circular integral of the magnetic field strength Symbol: F

We have been through this before, many times.

I would like you to think about this a little differently. Think about Force and the Balance and Counter-balance of Force. Perhaps think of Force as Weight: 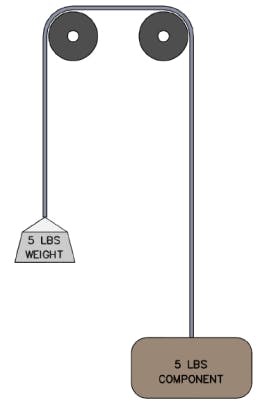 If both Weights are 5lbs then one side will see no difference and the Weights can sit level without one falling to the ground! A very small force is needed to get either force to the ground, much less than 5 lbs!

Our Coils and the system as a whole is the same! We must Counter-Balance the Secondary M.M.F with a Tertiary M.M.F so the Input see's little to no opposition!

by using a mechanical contrivance to accentuate and retard these forces at the right time it is possible to utilize the resultant force or Component force.

The problem is solved!