An active antenna tuned to a high enough frequency to pick up the high frequency energy permeating the universe.

By manipulating the EM fields, we can force an electrically-small receiving antenna to behave as if it was very, VERY large. The secret is to intentionally impress an artificial AC field upon the receiving antenna. We’ll transmit in order to receive, as it were. Conventional half-wave antennas already do exactly this because their electrons can slosh back and forth, generating their own EM fields. For example, the thin wires of a half-wave antenna are far too thin to block any incoming radio waves and absorb them. However, the current in such an antenna, as well as the voltage between the two wires, these send out large, wide, volume-filling EM fields which have a constant phase relative to the incoming waves. Because of the constant phase, these fields interact very strongly with those incoming waves. They create the lobes of an interference pattern, and this pattern has an odd characteristic: some of the incoming energy has apparently vanished. The fields produced by the antenna have cancelled out some of the energy of the impinging EM waves.

Rather than relying upon the wiggling electrons in the wires of the large half-wave antenna to generate EM fields… what if we used use a power supply instead? If an antenna is 1/10,000 wavelength across, we should be able to force it to behave as if it’s huge; perhaps 1/3 wavelength across. We simply have to drive it hard with an RF source. We must drive it at the *same* frequency as the incoming waves, then adjust the phase and amplitude of the power supply to a special value. At one particular value, our transmissions will cause the antenna to be best at absorbing the incoming waves.

Take a loop antenna as an example. If we want our little loop-antenna to receive far more radio energy than it normally would, then we need to produce a large AC current in the antenna coil, where the phase of this current is locked in synch with the waves we wish to receive, and is lagging by 90 degrees. The voltage across the antenna terminals stays about the same as when an undriven antenna receives those waves. However, since the current is much higher in the driven antenna, the energy received per second is much higher as well. This seems like engineering blasphemy, no? How can adding a larger current increase the RECEIVED power? And won’t our receiving antenna start transmitting? Yet this actually does work. Power equals volts times amps. To increase the RF power received from distant sources, we increase the antenna’s amperes intentionally.

Think like this: how large is the diameter of the antenna’s nearfield region at 10KHz? Around 10 kilometers? What if we could extract half of the incoming energy from that entire volume?!! In theory we can: half can be absorbed, and the other half scattered. In theory a tiny loop antenna sitting on your lab bench can intercept just as much energy as a longwire 1/2-wave antenna which is 10KM long. Bizarre, eh?

At resonance, the 10pF capacitance of our metal plate effectively vanishes. At resonance, an ideal parallel-resonant circuit behaves like an infinite resistor. If the LC circuit is exactly at resonance, and neglecting the resistance of the wires involved, how high will the voltage on the metal plate rise? It rises to ten megavolts!!!! The resonant circuit will continuously accumulate EM energy until the voltage at the antenna-plate rises to the same value of voltage as the transmitter. Weird!

Keep in mind that this device is a relatively small affair sitting in your back yard. It’s not a 1KHz quarter-wave dipole tower 25 miles tall. There’s no huge antenna, so we would not expect to find any huge level of electric power appearing in the circuit. If we weren’t aware of the mechanism behind this, all we’d see is a passive LC resonator which seems to burst into oscillation of its own accord, and the voltage grows higher and higher until the darned thing suffers a corona outbreak or something. Lightning bolts shoot out! The EM fields near the metal plate grow FAR STRONGER than the weak fields already present in the environment. The device in our back yard resembles an impossible “perpetual motion” machine, which might make physicists suspect a hoax.

I envision a device with two loop antennas. A circuit alternately charges (and discharges) each loop antenna at a resonant frequency with a high voltage, and the loop antennas are sized such that they are electrically 1/4th wavelength of the frequency used, and are spaced apart by 1/4 wavelength.

Thus we use very little current (we're just sloshing electrons back and forth between the antennas). With a high enough frequency, the antennas would be relatively small.

The resonant frequency used will expand the electromagnetic footprint of the antenna, making it appear electrically much, much larger than it physically is. Thus the EM waves from the antenna will intercept any radiation of an identical frequency.

This is somewhat akin to winding a coil and putting it beneath a high-tension wire to pick up the high-tension wire's EM field... except we'd be picking up the radiation ubiquitous throughout the universe... the quantum vacuum.

Now here's where it gets exciting... the higher the frequency (the shorter the wavelength), the higher the power of the received energy and thus the more efficient the circuit is. Get it up into the GHz range and you're talking some serious energy.

So we'd do an analysis of what available high-frequency wavemodes are highest energy, and tune the circuit to that frequency.

But this energy is exceedingly diffuse, which would require a high voltage on our antennas.

A permanent magnet's bound electrons are orbiting their nucleus at a certain rate and thus have what is known as electron cyclotron resonance.

The angular frequency of this electron cyclotron resonance is derived via the formula:

You can calculate the frequency here:

So if we could tune the circuit to the electron cyclotron frequency of a nearby magnet, we'd be able to extract energy from the magnet, whereupon the bound electrons would regain energy from the quantum vacuum. 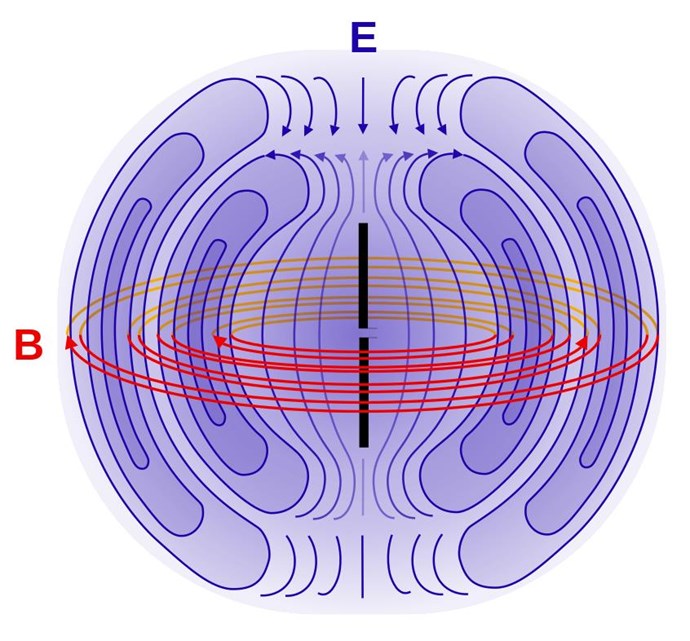 Now, Ironically, the Earths Van-Allen Belts look like this: 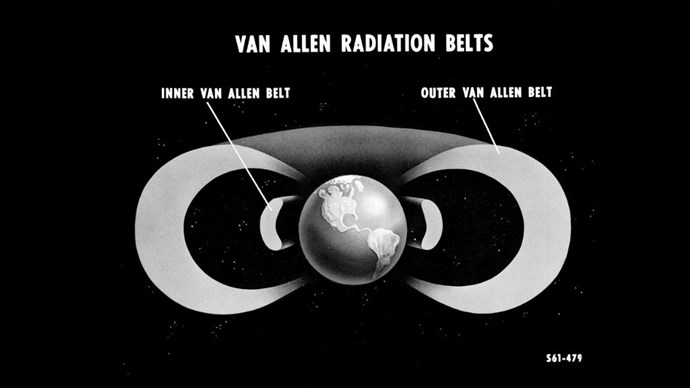 Isn't this amazing, it is true, the quote:

As above, so below, as within, so without, as the universe, so the soul…

Now, any moving Magnetic Field, as we know from Faraday's Law of Electromagnetic Induction, "Generates" a Voltage, or an E.M.F, Electromotive Force. Magnetic Resistance is called Reluctance, where the Magnetic Field is subjected to a, hard to move path, Resistance to movement or to traverse with Resistance.

By exposing the Path of least Resistance to a Dual Magnetic Field, Bucking Magnetic Fields, then the Magnetic Field has One Field in Addition and one in Subtraction to reluctance. This means both Fields Cancel each other out, vectorially, and the third Magnetic Field can traverse the Path with minimal Reluctance.

So, to all readers, Prometheus has given you a very in-depth look at the workings of these devices! Involved Math and also insight to what is happening in the immediate area around the Coils. The Near Field is the catalyst for Energy, Energy to be stored, and this all happens at 1 / 4, one quarter wavelength. We know this already, its already a fact we have studied.

So, pumping the Fields, this is where the Poynting Vector becomes important: 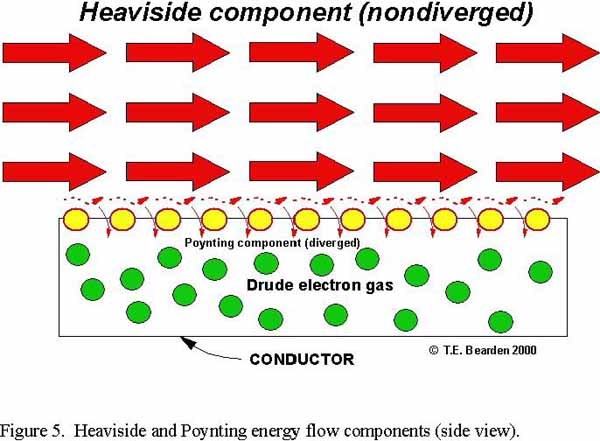 Energy diverges into the System, we are pumping Energy.

Where it should get really interesting is when one has wound their bucking coils (and configured their tank circuit) to have the same resonant frequency as the electron cyclotron frequency, and the core used is a weak permanent magnet (it has to be very magnetically weak (but magnetically hard so the domains don't unpin and flip), otherwise the permanent magnet's electron cyclotron frequency is so high that your resonant frequency is unobtainable with everyday electrical components). In that case, it matches the above example of the active antennas.

A "static" magnetic field isn't really static except in an inertial frame (ie: no differential movement between the magnetic field and whatever it's interacting with) because of that electron cyclotron resonance.