I wish to avoid any sort of Confusion, that is the purpose of this thread.

The Term Delayed Lenz has been bought up recently on this forum. The first time I heard it was a couple of years ago, a term used by The Goon Squad, over at ou.com.

What is it? It was shown to be the difference in Signal down an Iron Bar: 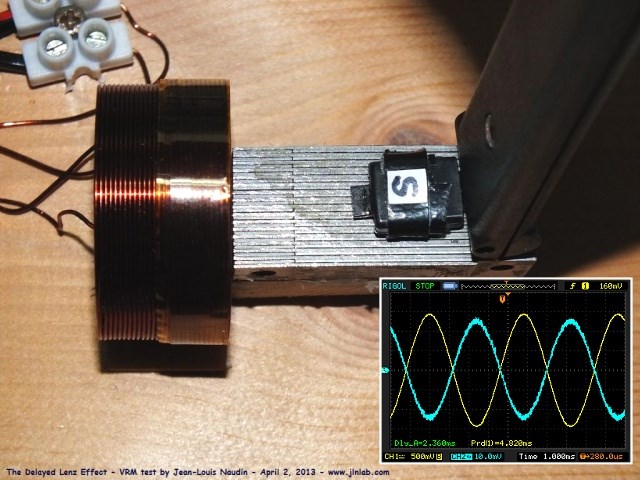 This is an artifact of misconception!

Why do I say this? Because repeat the same experiment with two coils instead of a Coil and a hall probe, then you get very different results! A misconception!

Partnered Output Coils require Magnetic Resonance, this is by definition, Equal and Opposite Currents! This by definition is Lenz's Law which is mathematically a Negative Sign ( - ) in the equations.

Delayed Lenz is an interesting effect, but it will never in a million years yield Energy Gains! Like I said, put a Coil in place of the Probe, with a Current Sensing Resistor, all the magic disappears - Misconception!

JLN's experiment should have used the term Signal Propagation Delay, instead of Delayed Lenz.

In reference to Phase Shifting the Input Current to the Output Current, this is a different storey. The patent by Nikola Tesla that was bought up, is a viable path of discovery. How much so, I can only guess.

Always, a Change in Current can produce an E.M.F, this requirement must come from somewhere. If you are able to create this change as I have been suggesting ( by invoking a change that is not related to the Input, either by direct coupling, or phase ), and then requiring a Pumping of Current, which then will be required for the rest of the Cycle. I believe you will end up with what I am already sharing with you but perhaps in a different geometrical arrangement.

I only want to be clear, I just don't want members off chasing red hearings!