Some years back, I did an experiment, it showed some amazing results:

This experiment was by chance, I stumbled onto this effect, however, it is similar to some awesome work by a friend of mine: Ioannis Xydous

Some links to Ioannis Xydous work:

For some, there may not be an interest, however, if you're like me, I am fascinated!

Some years back, I did an experiment, it showed some amazing results:

Have you tried connecting caps to those open coils (either across each coil individually, or cross-connected between coils)?

I have done many experiments. The most simple cheapest experiments I have learnt by far the most from!

Here's one you might not have tried. Tilt the transformer frame up, so it's vertical. Connect capacitors to each of your open-circuit coils such that each coil/cap LC resonates at 14.07 Hz, and drive the drive-coil with 14.14 Hz.

That should hook you into the second harmonic of the Schumann Resonance (purported by Boeing Research & Technology to be the highest-gain harmonic of the 7.83 Hz gravity wavemode). You might have to fiddle a bit with the drive frequency.

Given that you've already demonstrated a weak ExB effect in your video above, that should give you a basis to build on that.

No, I have not tried that one.

Some early experiments earlier on in my time did show resonances of a similar frequency, from memory around 13.7 and 24 or so hertz. Some data on my site about those resonances.

I have no secrets to keep, in the video, its a very simple experiment: 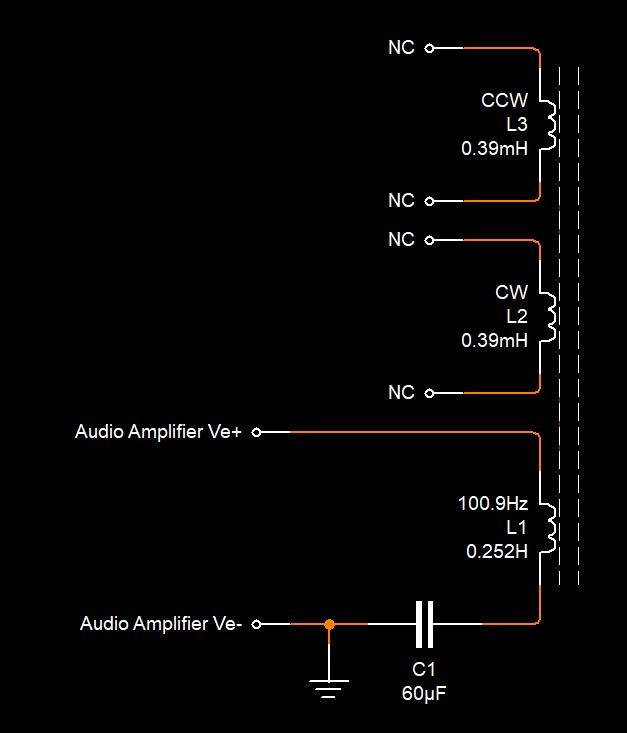 I believe Capacitance in the Amplifier itself added to the Circuit Capacitance, giving 100.9 Hz or so Resonance. Of course as you know, one Coil was CW and one CCW. The coils were identical, from the same shop, same wire and same initial inductance values.

The Inertia, of the Coils being Polarised is the only thing I could think of that creates the Displacement. Somewhat like the Polarisation of Spin Wave:

Two of these together but in opposite polarity's. The Lense-Thirring Effect, or the Protational Field at work!

I think your device qualifies as so simple people will disbelieve it based on its simplicity alone. Propulsion is not my interest, but this is so simple that it should be widely reproducible. Hopefully you get some people interested in propulsion research who will try this.

For anyone who thinks this is magnetic attraction they must remember that the magnetic field is largely in the core. Even if the core is saturated it is looped back on itself which means the path of least energy for the magnetic field will be through the core itself and not into nearby objects.

According to transformer theory this device should be unloaded so the input power required should not be very great. Lots of movement, little reason to think it is magnetic attraction alone, and it is super simple. If people who are interested in propulsion aren't intrigued enough to give it a try and share their results then its a shame. I assume it only does this when in resonance and as soon as it is out of resonance it no longer behaves like this.

If you want to get more interest I'd recommend a video showing how it moves when it is zip tied to a wheeled platform (like an old roller-skate) include a yard stick on the desk to show distance moved and a level on the surface to show that it is not moving downhill. Show that it moves in whatever direction you orient it, etc.

I agree and this will be my Goal after my current Goal is achieved.