Hi , I move this device to a seperate thread.

Hello Team, Here i post some additional information related to the pulsmoto-generator, some observations. From the first testing I have noted that the motor is running around 40% faster when connecting the electromagnets in repulsive mode. I was thinking about the similarities with bucking coils, magnets, compressed ether.There seems to be a extra potential as there is a measurable increase of performance compared when connecting in attracting mode, with the same input power, at the sweet spot in timing. Here is a short video with some construction details and the first testing I have done

Another observation that I have made regarding the BEMF. With the small coils extracted from a washer draining pump the spikes where very high voltage, if I removed the parallel capacitors from the charging batteries the electrolytes break down which could be observed on the meter, showing the spikes shot through the batteries.Although the small uf 4007diods could handle it without issue. I noted that there was virtually no charging, when connected the voltage has climbed, but when the motor stopped the voltage falls very fast again.

Today I completed to wind two new coils,, I could recycle a good weight of magnetic wire from an old refrigerator motor , mi phone don't have memory to atach the pictures, I will do it later from the laptop. When I tested the coils, they have about 1200turns of 0.7mm wire, after 5 seconds the uf4007 diodes died with a litte smoke exhaust😂 . Despite of the lower voltage the BEMF was lots stronger, cause of the increment of amp/turns in the new coils. So I decided to make a new board with other diods and mosfets for more current capabilities ,to go on testing the new coils.

here some updates from the pulsmotor, when i mounted the new coils and driver , and began with some tests, there was a surprising effect, not wat i was looking for at all! First when running with 12 v all looked quite norman, whwn i rised the voltage to 24 the coils starts to autooscillate, with the neon brightly lit and the BEMF side with three batteries connected the voltage rised very fast, in a few seconds it had climbed to over 600V which is the limit of the analog meter. Also the inputcurrent has increased to over 4 amps and the motor did not run , it slowed down until it stopped, and the oscillation continued.I had to disconnect as the BEMF diods heated a lot. After some time of checking  i found that there was a coupling from the fotodiods wires, which produced the autooscillation. The same effect which is used in some  SSTC circuits with antenna feedback.

with only one swiching puls the coils started to oscillate immediatly. I cancelled this effect easyly by adding two 100nf caps ti the inputline as a lowpass filter.But when  i was thinking about the powerful the effect has been, i decided to do some more testing, as there could be longitudinal waves involved n and maybe ther is some useful info for those working on that topics.

for the moment i attach some pics of the setup and a circuit diagram.Later i will make a video from the effect and tests. 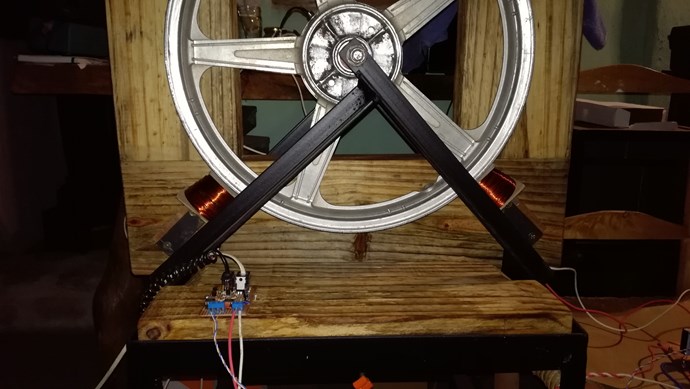 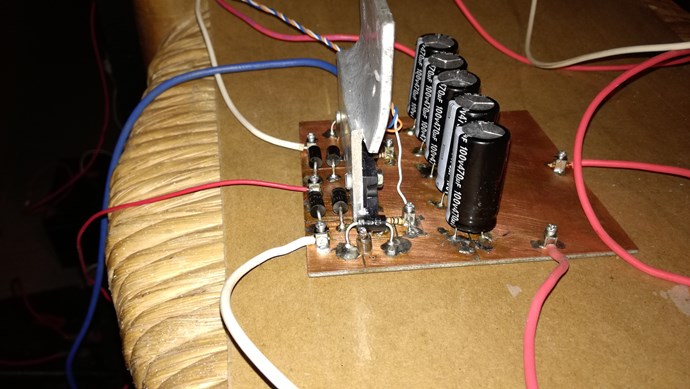 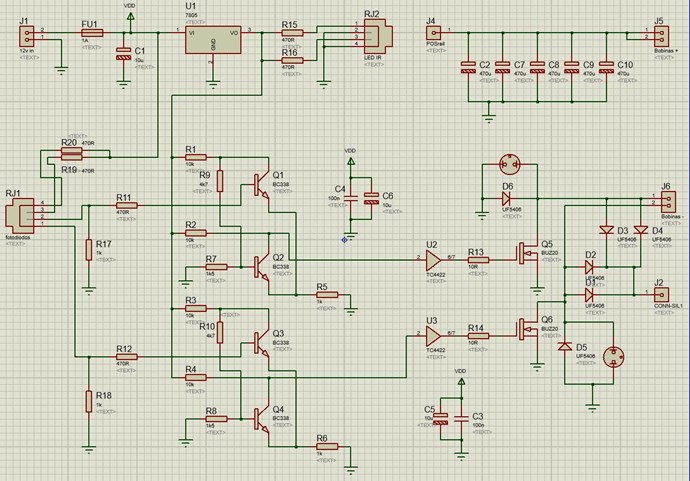 Here I have made the video from the self oscillation effect.

Sorry this post should be at the beginning, i could not move it

Hello As i began building a MG device a couple of weeks ago, a pulsed motor of Adams type, which is intended to perform testing about the BEMF , Lenz force and comparison of different types of generator coils. It is built from scratch and recycled materials. I wanted to share this for if someone is interested. It is one of my first videos, please apologize the bad quality, I hope the updates will be better.At this moment there's still no generator parts mounted, and I am working to increase the speed still. Here is the link to the video:

Hi Vidura, another video many here may be familiar with:

The above video so impressed me! I studied for many hours, I could not find any foul play! Although Richard did not end up providing what he promised, I think he had something. Initially this pulse motor was working as was stated.

Richard was yet another inventor that got tied up with Investors. This always turns out to be a very bad thing! Legal agreements always turn out to be bad for the inventor.

One of Richard's early circuits: 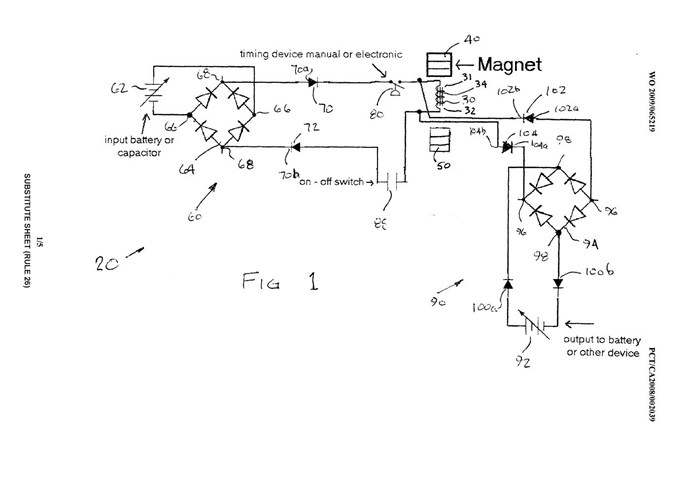 Pulse Motors can be a very valuable learning tool!

Thank's for the comment, there are actually some very interesting devices, the first video is very low quality, a littel difficult to distinguish details. The circuit  below i have seen in patrik kellys book, whats your opinion about the output bridge rectifier, deliberatly changed position for missleading, or might exist somthing like bucking diods?

I think Magnacoasters circuit is a long ways off what he really used. However, the circuit does show something that rings true with me. The rectification of a Half Wave.

Chris, that could be possible, and the diods 102 and 104 could be zener in order to draw current mantaining certain potencial in the coils.

Today i made a couple of tests with pickupcoils and coil shortening tecnique.I have used the AC motorcoils that i used as drivecoils before, but coreless mounted on a peace of timber. 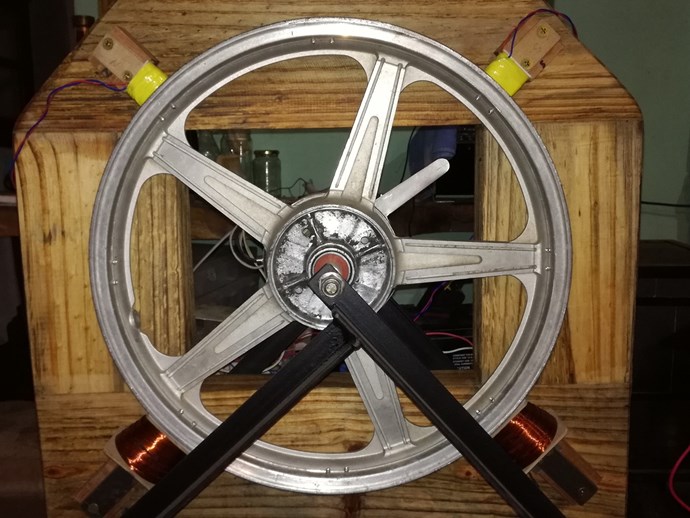 I'm still not Happy with the speed of the Pulsmotor  about 250RPM, i will have to add drivingcoils i guess.Also the thin wiregauge of the pickup coils is not the best, too much ohmic losses  at lower voltages, but anyway here some results from the coilshorting:

the two coils connected en series with a rectifierbridge to a 330uF cap. give a voltage of 12 V.

then shorting the coils with 20% dutycycle it rises to 60V, I was playing around with frequency and duty and found the best values

at 1.6 kHz and between 90 and 95% dutycycle! which is better described as coil unshortening, this way the voltage rised up to 200+ volts.

here the circuit i used , it is based on one that debunkified has published. 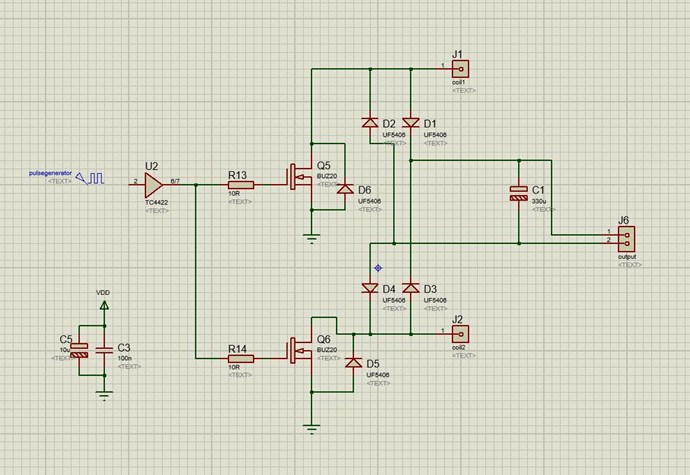 as i can't continue with the motor building for the moment due lack of materials and money i made an other test to find out more about the self oscillation of the coils. I don't think there is any OU in this effect, but although it might be interesting to understand how this effect might be produced. here is a short video about the test:

There are two things that took my attention, in first place it is possible to oscillate massive coils with soft iron core  at frequencies up to the megahertz range, at least when pulsing DC is applied. And second , the ferromagnetic core acts not only magnetically, but has also an electric component, and a capacitive coupling with the windings , it also might have antenna properties. If somebody knows more about this pleas correct me if i'm wrong.

I wanted to add another observation I made, after a few minutes of testing the soft iron core was considerable magnetized, it attach to a screwdriver and stayed magnetized for about 5 minutes