Good Friends, Well for some years now, I have been observing and trying to replicate some projects about FreeEnergy, to try to understand and try to separate the real from fiction, the big problem, is that not everyone gives much information about the origin of their works, so it is difficult to go to the source of everything and be more accurate in the conclusions when one tries to replicate.

After working with power transmission replicas by 1 driver, which you can see on my channel the youtube

If time permits, I will try to make some thread about this.

I began to study how to make an economic oscillator that would allow me to replicate these experiments, but without expensive instruments, it was there that I reached a couple of schemes that worked for me. But I didn't know where they came from, until recently.

It was there that I arrived at several sites and schemes that worked for different purposes, one of them was that of Akula, and that of Lasersaber, both used a transformer that eventually worked in resonance, worked with both schemes, worked, but when the power was disconnected , the LEDs went out in less than 1 second. For its simplicity, I spent working with the Lasersaber scheme, and arrived at the source of the scheme, and coincidentally with some modifications, it also worked for my power transmitter for 1 conductor.

The original Oscillator is called the Armstrong Oscillator (it may come even further behind than Tesla itself, but I don't know), and it is a small oscillator that oscillates by Magnetic coupling between its coils, the Original scheme is this: 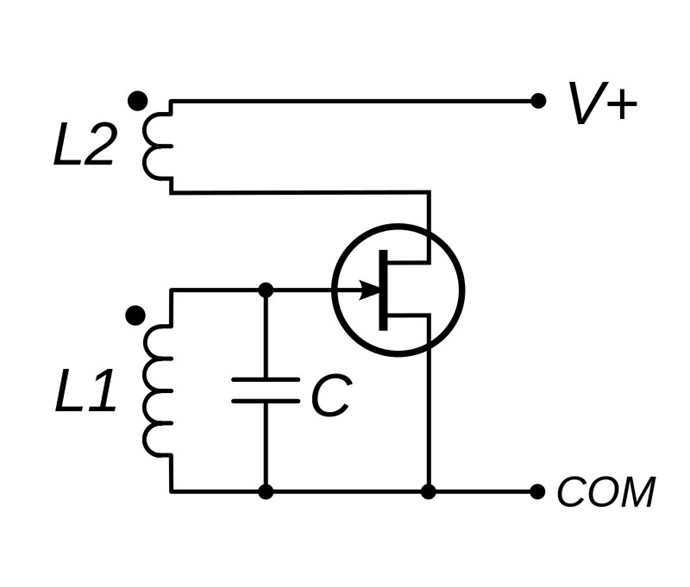 Where C, can be removed, if the coil has enough capacity between turns, to put it to work, here the Used Transistor is very important, it does not work with anyone.

If we observe the scheme of lasersaber SJR Looper V4.1: 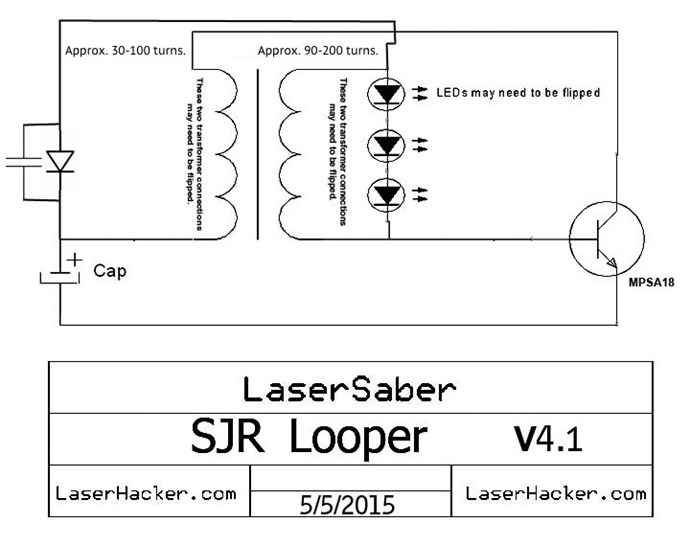 We see its similarity, with the Original scheme.

That also has something of the Joule Thief circuit, the big problem of the Joule Thief, is that it can work with little voltage, at the cost of a high current, and here the current is the great limitation to achieve autonomy without connection of the source of feeding.

Returning to the LaserSaber scheme, the transformer was not so simple to make, nor to tune, here we cannot adjust the frequency with an external capacitor or regulate the pulse frequency. So adjusting it becomes very difficult. It does not always work, and when I did it in my case, it consumed so much current, that it did not stay on after removing the power.

I spend a lot of time until it manages to operate the circuit fairly well, with almost any ferrite transformer that we can catch on any unused PC power supply.

And as you can see it works: 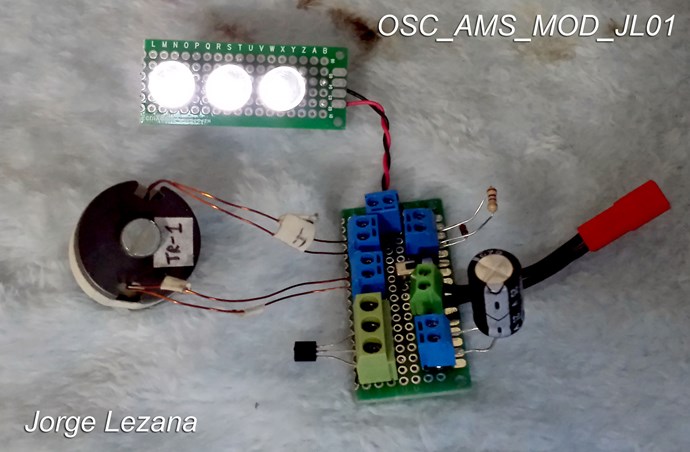 And the Video in a Test:

The final scheme I work with is as follows: 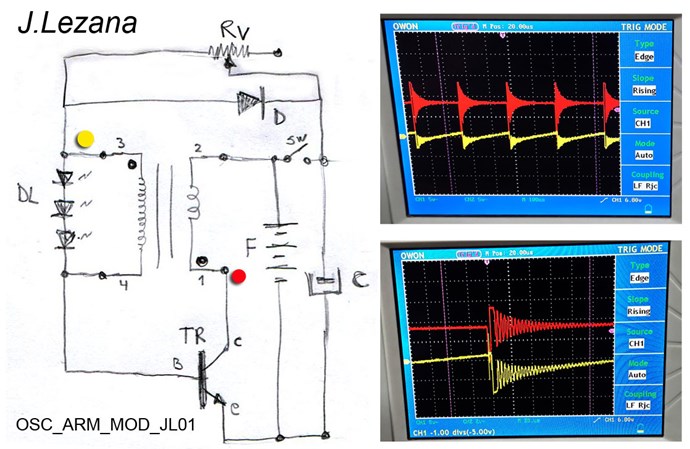 In it you can see a red and yellow point, where you can see the waveform at these points.
The detail of the elements is:

This Resistance is important and must be found for each transformer that they make, it will allow to adjust the Working Current of the entire Circuit that Round between 50 and 120 uA and also make the LEDs turn on.

The transformer I use, they have a 1: 3 Turning Ratio I've used from thin and thick wire, they all work for me,

The one in the photo and video is about 20 laps in the Primary and about 50 in the Secondary, of the same wire gauge. (1 meter of wire in the primary and almost 3 meters in the secondary)

The muffled frequency in my circuit is approximately 300 KHZ and the Pulse is around 4.5KHz.

An important detail to expose here, is that the Fast Diode 1N4148, is not necessary at all, can work without it. In Tests I did I realized that at high voltages, there is no BFEM that can help maintain the charge on the capacitor, depending on the transistor, the BFEM appears at voltages below 4 Volts. I could verify this, with the Switch that I put between the source and the Condenser.

The idea of charging the capacitor at about 9 Volt. is to allow it to discharge slowly and reach the working limit voltage of about 2 Volt. If they load it with 3 Volt, it won't last long.

The current consumption of my Circuit is only 60 uA. At 9 Volt, with a 1000uF capacitor it gives me a time on of about 2 Minutes. While the LEDs look slightly on for much longer, the useful light I think is around 2 minutes.

I encourage you to try this circuit and show your results.

In order for us to move forward, it is important to place your test data:

I will keep an eye on any comments, and I hope that my translation from Spanish to English is understandable.

HI Jorge is nice that you get this consumption il replicate yours also, i play with this schematic and my amp draw is between 1-10mA  and with 10mA you get realy good light like real flashlight.  Good job and thank you for the good work .

In my scheme, the consumption is manipulated with the RV, adjusting to a lower value, you will be able to increase the consumption in exchange for more brightness, to the point of even lighting much more than the LED illuminates to 3V. you have to be careful not to burn the led ..

I leave some captures of the measurements of the capacitor and transistor and in addition to the consumption in full operation. 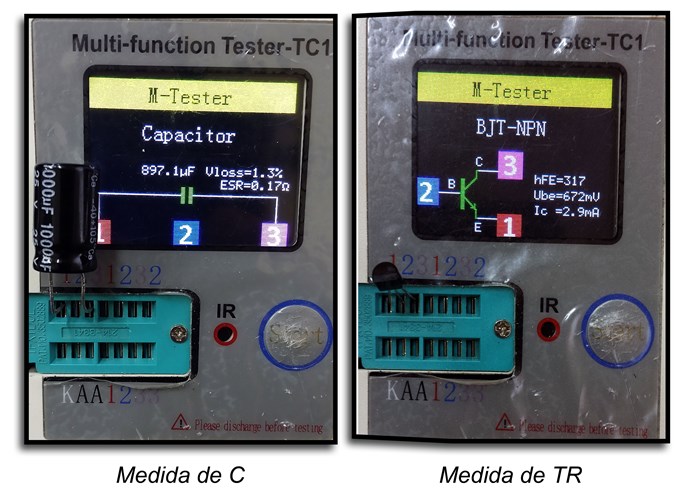 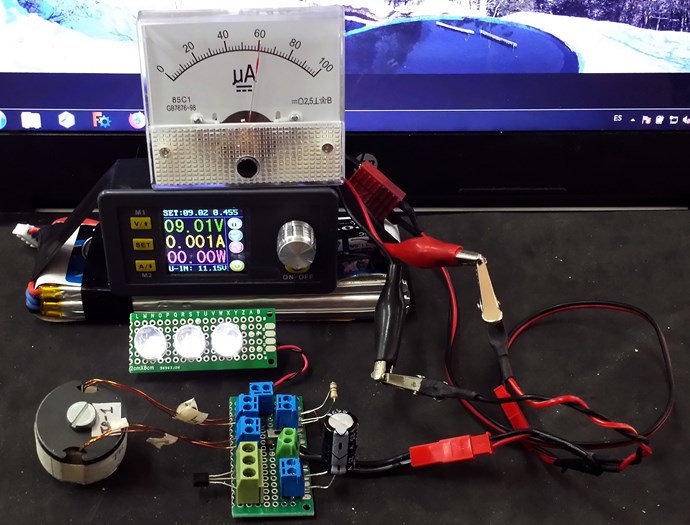 Hello everyone in the past I replicated lasersabers's sjr looper circuit and when you charge the 470u cap with the 9v battery it will run for something like 5 minutes. The transformer is wound with litz wire and I dont know the turns count because I was not counting I just put it together and it worked

. Here are the two videos I made:

Have a great day everyone !

Hello Deny, excellent time and half capacity of what I use ..

Do you remember which transistor and diode you used?

A detail that I see, is that apparently the circuit is different, does the diode see it connected to the negative of the capacitor?

Do you remember the scheme you used?

Hello Jlezana the capacitor is 470uf

transistor is 2n2222a but as I observed it does not matter that much on the transistor but anything similar to 2n2222a works best. And the diode is most important I think because I tried many different ones but only one worked and it is schottky diode sb140 but im not sure at the moment. Later I will post the exact diode I am using.

Yes I can remember I was trying to build this circuit but I am not sure why I made some changes. I was just turning things around and just playing with it connecting it in different configurations especialy the diode, LED, and transformer. I ended up with this: 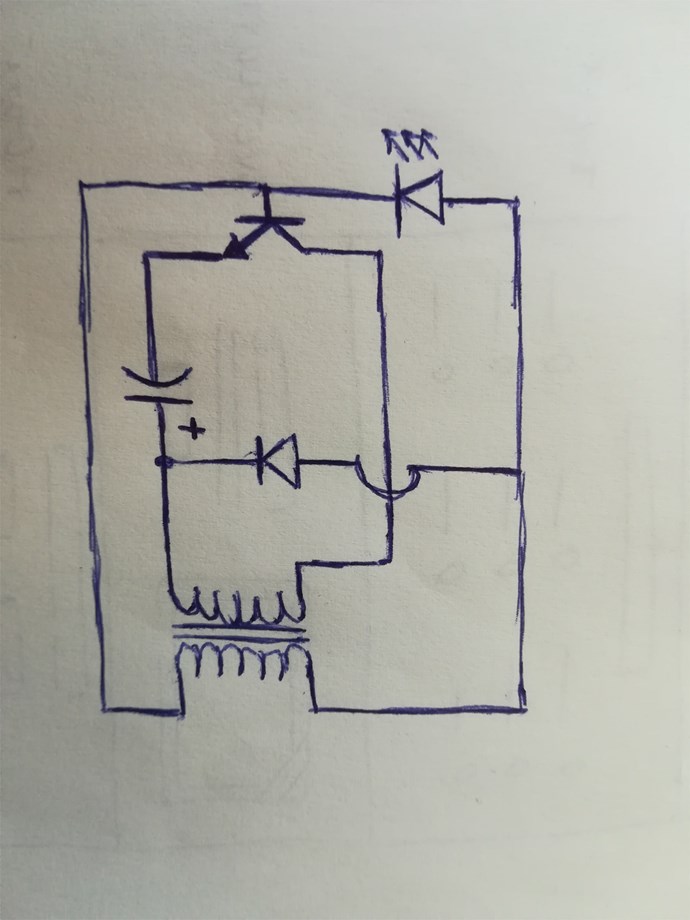 This is the circuit in the video. I hope it is understandable

Here are some more photos of the circuit but on the old breadbord. Forgive me the mess

I was testing there more things at once but you can see there the circuit. 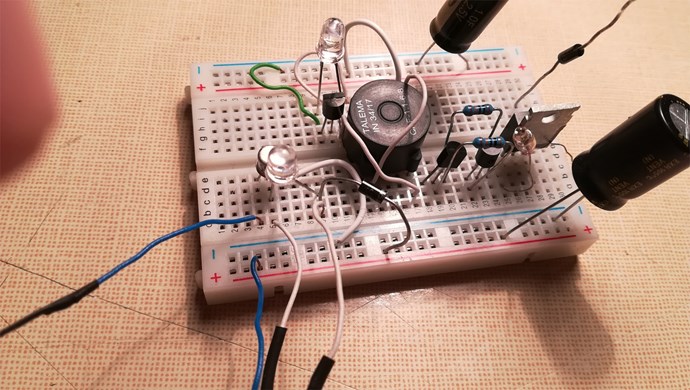 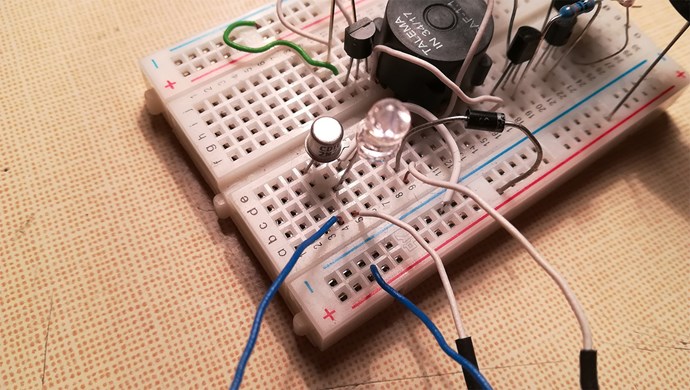 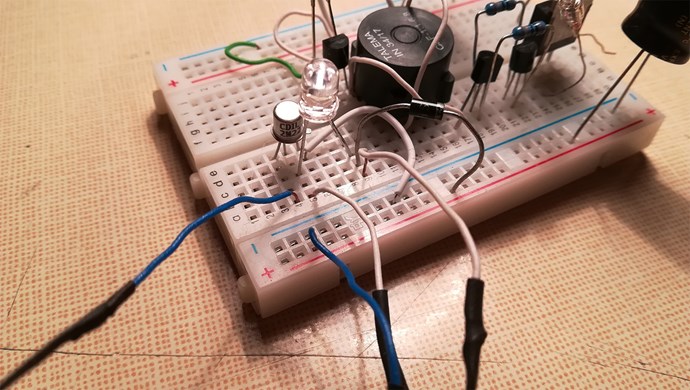 ask anything you want later I will post the exact diode I used.

Thank you for your response, they are useful for everyone ..

I will try some modifications and wind up some more transformers, if I achieve better improvement I will publish the improvements.

At the moment it is important to arrive with 450uF at the same time you arrive.

Mitza84 posted this 4 weeks ago

Hi Jlezana i replicated this oscillator and i notice something when i touch the base of the transistor wire i can catch radio station and i can hear it in the coil like in a speaker but not so loud and the led gets brighter and the consumtion goes down to some point . is very interesting circuit .

skywatcher posted this 4 weeks ago

I doubt that LEDs can be so bright with only 7 uA. So if the values are correct, there must be additional energy from somewhere else.

Deny posted this 3 weeks ago

Hello skywatcher I will try to film it running till the led shuts down. In the past I noticed the circuit was very dependant on the diode. Only one type of diode that I have laying around worked and another thing is that if you touch the terminals of the diode with your hand depending on the moisture the led brightness varies but the circuit will run down much faster. Also different coils have different effects. In the video the coil is wound with the litz wire on top of each other but I dont know the turns ratio. And I destroyed many 2N222 transitors just playing with it when I accidentaly touched the body of the transitor with one leg of the diode and so on... Now I have different transistor in the circuit something simillar to 2N222 but not with the metal body.