Universe Breaking Simulation [Not Quite, but very interesting]

I present to you an interesting simulation. Did I break the Universe or only the simulator. You decide:

I have to admit, I am not familiar enough with the simulator enough to see what's going on where.

Short answer: IMO the simulation shows what would happen if you had nearly superconducting diodes. Energy would get trapped in the inductor. I believe the mistake I made is a failure to put a small series resistance. I just replaced the transformer with a plain old inductor and the same thing occurs. Essentially discharging high voltage into an inductor causes the electrons to gain momentum, the superconducting diode prevents the loss of that momentum. Because the momentum is conserved so as long as the charge/discharge occurs repeatedly while the momentum is high then the current can build up to extreme levels.

The circuit stores all the energy its given in a large capacitor so nothing is ever lost. The charging capacitance is so large that the voltage would take a long time to build up, ensuring a very large difference between the source and the destination. Does this have practical value? It depends on whether a diode could be constructed that would allow this to occur and that the equations the simulator uses is based on reality.

FYI, I think was incorrect regarding the reasons why the simulation does this. The effect actually seems to be caused by the forward voltage drop (Vf) of the diode. A very small Vf actually hinders this as does a very large one. Its almost as if the inertia of the system supplies current which seen across the diode appears as a voltage source. The simulator does show that a diode with a higher Vf can improve the efficiency of this effect. That's not exactly intuitive. I spent many hours trying to manipulate this effect but was unable to make the simulator show a provable OU. While that is not surprising, it was maybe a little surprising that a Schottky hinders the effect while a LED amplifies it. It may be worth studying more, as a way of achieving higher efficiencies in systems that are already OU.

If someone is having trouble getting their eternal lantern above unity, but is otherwise very close, try experimenting with different diodes as it may be enough to fix the issue.

Here is a circuit that I created to explore this idea in case anyone wants to play around with it. The circuit explores charging a high farad capacitor while lighting LEDs. The LED with the 10 ohm resistor has a special purpose, it allows the capacitor to charge to a higher voltage while retaining some efficiency. Otherwise the circuit would quickly lose steam.

So after much simulation I did some experimentation to see how well this idea performs in real life. Here is my circuit:

I chose not to use a high Farad capacitor and opted instead simply to study it from the flyback. This did provide some interesting data and personal experience I can use in future experiments. Here was the basic setup running in a steady state at 75% duty cycle 14kHz using my 10-tapped transformer core. The exactly transformer specifications aren't too important as the effect will change a little bit but as long as you have a decent amount of inductance and the windings are low resistance it should work fine. My cores are amorphous core, not sure how well it works with other cores, but the effect should be there if not stronger or weaker. For this experiment the ratio of my high side of my transformer to low side is 9:1. This experiment does work well at any ratio, including one with no center tap at all, but the behavior and wave forms is a little different. Its difficult to say how much it mattered, but I really liked the waveform generated by the 9:1 version. Its very dramatic and abrupt where the one with just a single inductor has an interesting characteristic of large ringing on switch closing.

The basic idea behind all of the above simulations is that energy can build up in an inductor over time and that energy can be recycled through a load and finally dumped into a capacitor. Then at 1V your 500F capacitor can be boosted up to 12V and pumped back into your source and recycled again further increasing the efficiency. Of course it takes a lot of input energy to get it to that point and is not entirely risk free to mess with that so I skipped that part and just focused on testing the energy circulation as I was curious how well it performed. Source is a 12V battery. There are 8 LEDs, I think they are 0.5W 2.62V. Input power is around 1 watt. 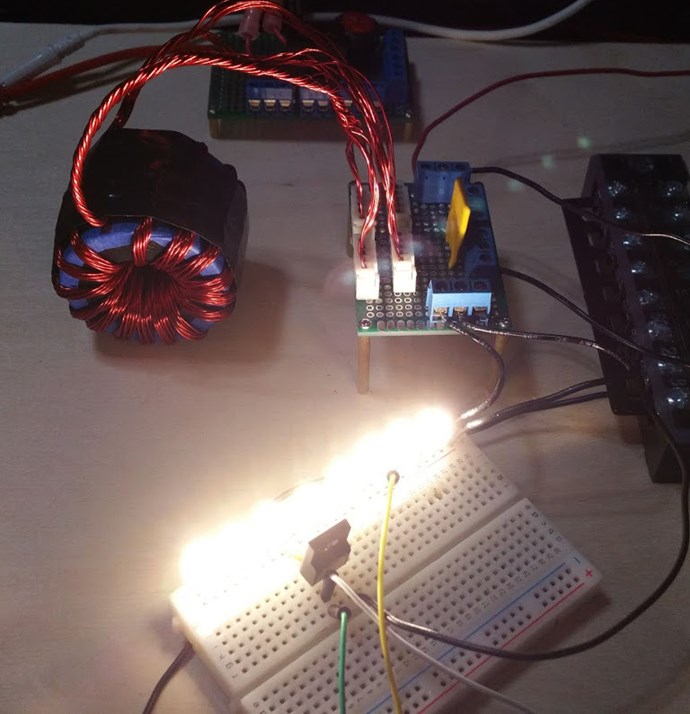 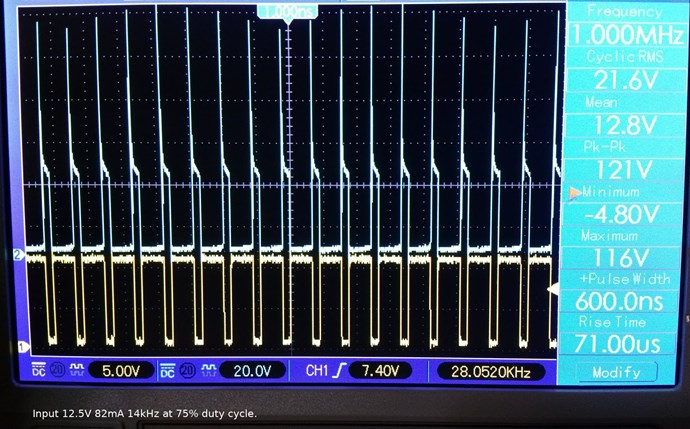 Just ignore my crappy scope, I think its seeing ringing and misreading the frequency.

So finally if you read this far now you get to see the effect of how energy can build up over time. Although it was hard to show at the frequency I was operating at above, I managed to tweak the frequency and use pulse bursts to illustrate how over time the energy builds up: 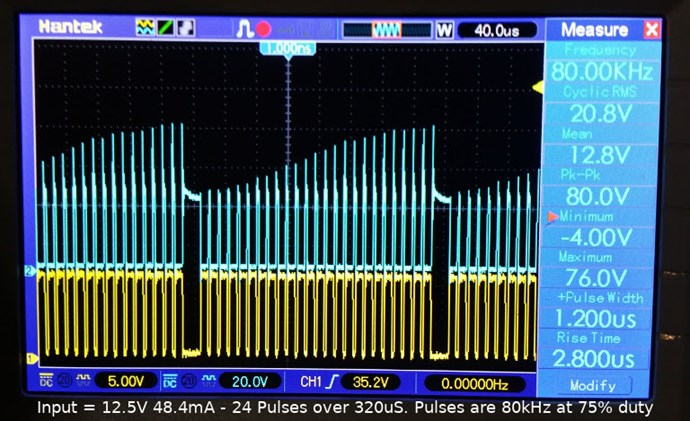 Notice how even a short lapse resets much of the progress gained. This is very important characteristic of the effect shown in the simulator. Overtime small pushes create increasing current flow in the inductor. The simulator while significantly different than real life does do an adequate job of modeling the effect. There are downsides. The increase in energy adds a loading effect. Not terribly bad if you plan on capturing all the energy in a capacitor anyway, but it is a consideration that could potentially limit its usefulness at least as a load on the primary. That effect could prove more useful in future designs that exploit partnered output coils.

Hope you learned something useful, I know I did. I think the effect is worth taking a couple days to study. I would recommend not becoming terribly obsessed with trying to prove its exact efficiency. Even though the effect does scale well when LEDs are used in parallel and all energy can be saved in a high farad capacitor. For me this is something to exploit in the future more than simply trying to build high efficiency lanterns.

Awesome! Thanks for sharing!

If I may say, there is no Bucking, no Partnered Output Coils configuration, so no Energy "Generation"? Can you please correct me if this is not the case.

Really, the whole idea I am trying to share is Bucking Fields, Timed responses to Magnetic Field bursts, with Coil interactions.

Technically it does try to exploit asymmetric reguaging to provide more work with less input energy. However, the effect is entirely conventional. It works whether you use a single inductor or a center(multi) tapped inductor. It does not use any type of resonance although there is no reason to rule out enhancement of the effect from resonance.

I would say that it is not entirely against the rules for it to be used to break symmetry (I don't wish to go into the why at this time), but the difficulty in proving it is very challenging. We are choosing to waste all of the energy by not dumping it into a capacitor and also we cannot easily prove the efficiency of the light output although you can see from the photo that we are not dealing with an insignificant amount of light. The LEDs are blinding at 1watt input. Finally, circuit has had very little done to improve efficiency, other than swapping a mosfet to prevent avalanche breakdown. So what I showed is not at all the maximum efficiency or else you might think I am just that good that I made such an efficient device with only spent a few hours playing with it over the last few days.

However, it does not use partnered output coils to do any of this, and I think that if its this good without POC, it could be very impressive as part of a POC. IMO the efficiency is at least 100% if a capacitor and efficient boost circuit is used to save and recycle the energy we throw away.

If someone confuses what I am showing with the effect you are trying to teach with bucking coils, then I recommend you remind them that this circuit doesn't use bucking coils.

Thanks for clarifying. Your work is excellent! Thanks for sharing! Its exciting to see others progress.

Studing a pulse is important. What is the Time Rate of Change?

The Transistor, or Mosfet has a Rise Time and a Fall Time. It is these small things that create the a disturbance in the Radiating Field of the Conductor. I think this subject is very important to think about.

At Flat Line, no change is created - DC has no Change!

If one concentrates on the Field that is changed around the Conductor. What can the Field do after this CHANGE?