I have built a small calculator to help all members here at Aboverunity.com. 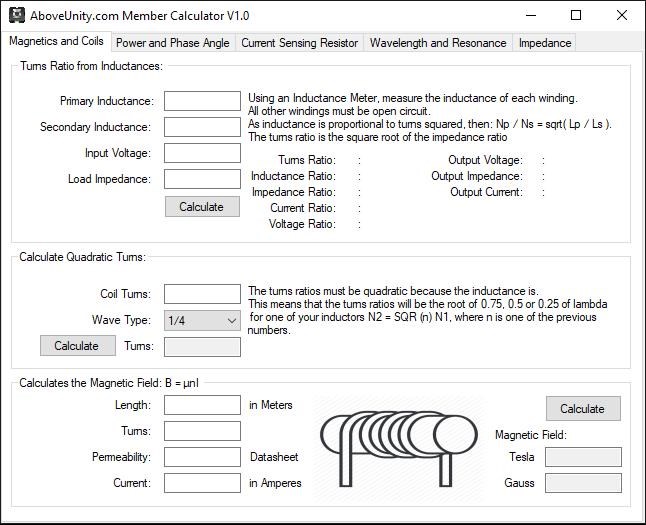 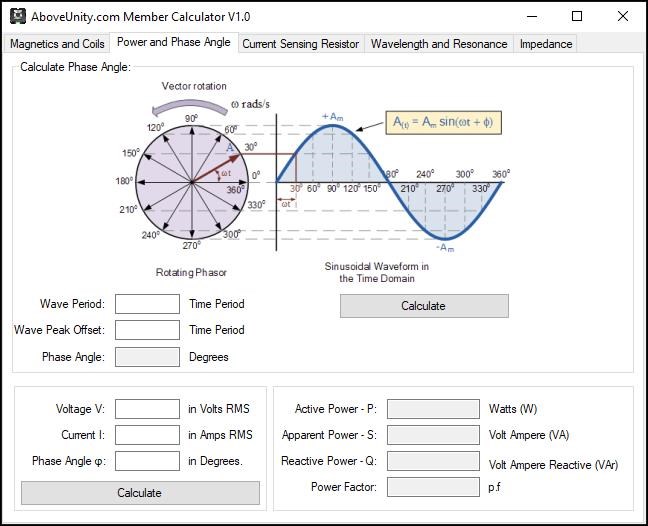 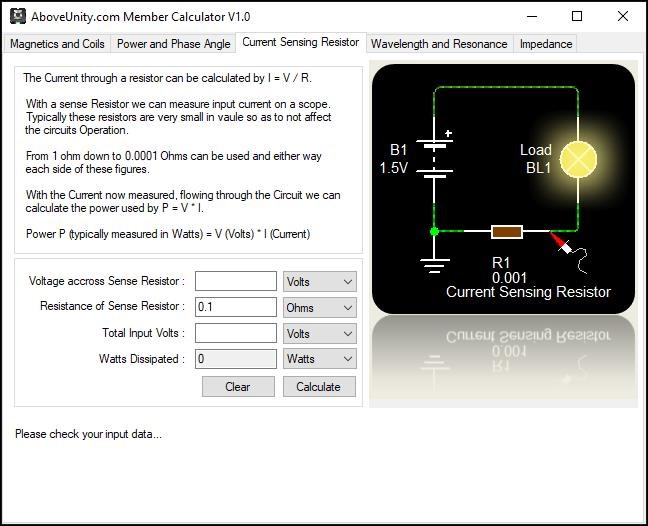 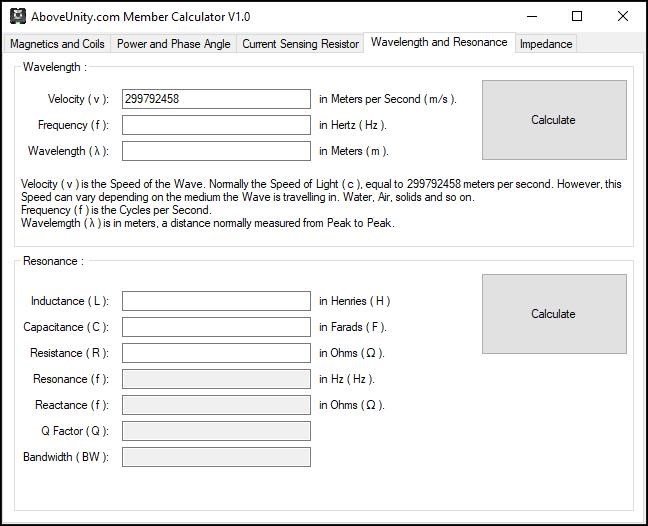 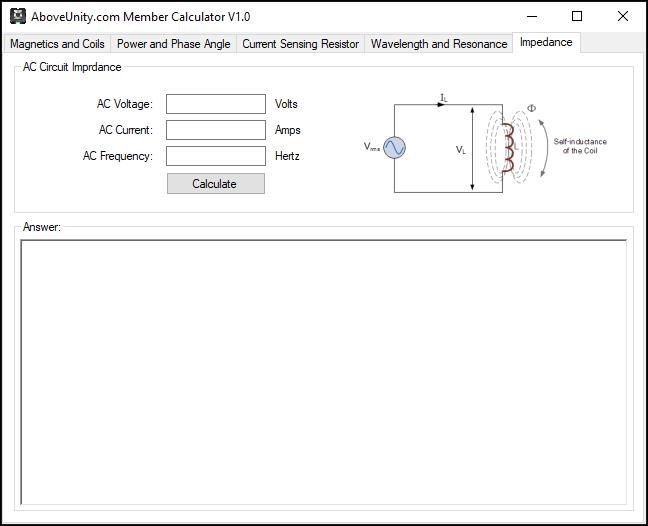 If you want to use it, its attached below in .Net 4.5 Format. There are a few Developers here, so please add feed back if you wish.

First file is the Code, second is the EXE File, the calculator.

this calculator is very usefull

Thanks Chris. Nice to have them all together. Thank you also for all the effort you put in and for your patience. I know the slow progress frustrates you at times but we (most of us) have a lot to learn.

Just downloaded it and the source-code, it's a lot of work, formulas and knowledge incorporated in it !

I'll use it a lot and as it's C# code if I find there are other useful things which may be added I'll add them and provide the source-code back to you so you can review the code added and eventually incorporate it in the public code repository.

Hey Chris and All Great, a useful tool. I was looking for something similar, there is an online calculator for coils on the web called coil32 , it is very complete it seems, have a look, maybe some features could be interesting to add on your calculator. Regards Vidura

Excellent ! Thank You my freind !!!

I have added some new Calculators to the Aboveunity Member Calculator: 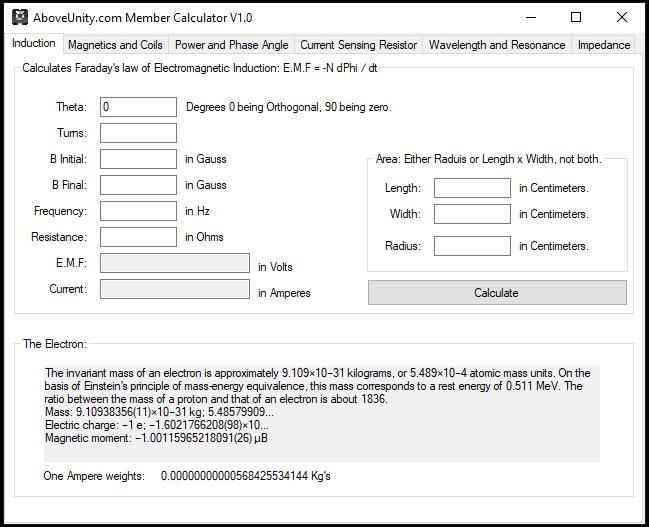 If you wish, you can test the EMF Calculator here. Remember, one Tesla is 10000 Gauss.

Fantastic! I already started to work with the class you provided a few days ago, but you moved much faster. Thank you, buddy! You saved me some work time.

A small update, a request by CD_Sharp, I have added the Transformer Calculator, to obtain Turns or Flux: 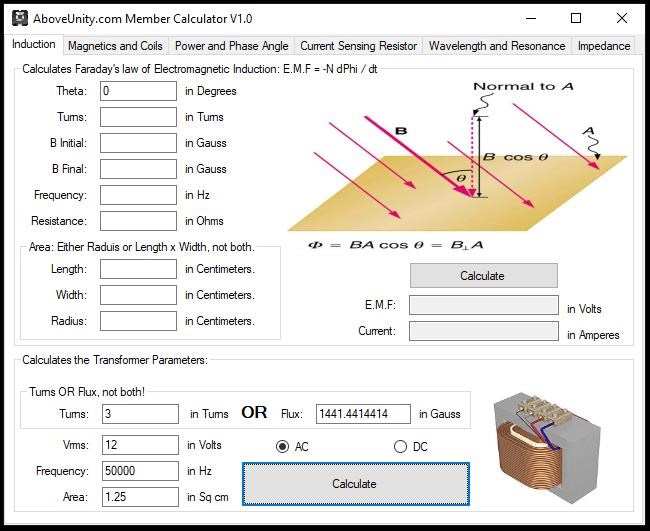 I should explain, the AC and DC Radio Buttons change the Form Factor value, 4.0 for DC to 4.44 for AC. Please remember to select the right option of the value given will not be correct. This value comes from: The average emf per turn = 1.11, RMS value of emf per turn = 4.44. So in an AC Transformer, Sinusoidal, FormFactor = 4.44.

Now you can calculate Transformer Turns or Flux. Sorry this took so long! I have been busy with everything.

Another small addition, Reactance by itself: 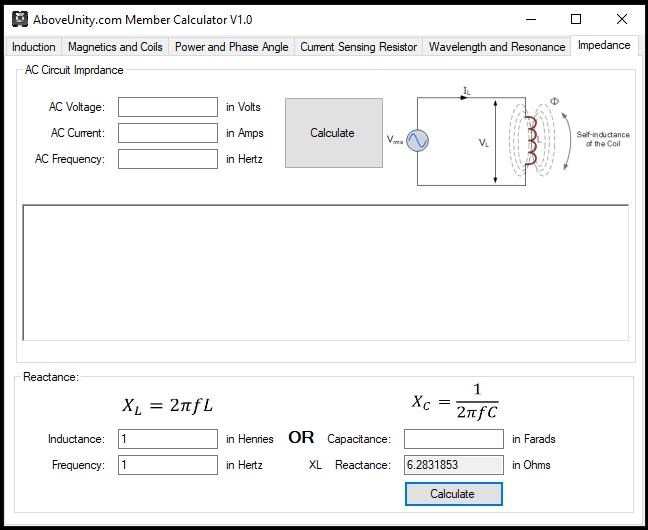 thanks for this calculator.
In my case it only works if I use the comma instead of the dot .
It works very well thanks.

Ah, yes, the Country you have your Local Computer settings determine this. Some countries use 1,000 and some 1000, the formats can be quite different even for the decimal operators.

I think it is a very useful tool! I am glad it is helping others!

Yes it is helpfull

AS AN EXAMPLE IN the sensing resistor section we have to change the 0.1 which is already programmed with a dot

It’s just to help other members.
thanks

I can change, so it is already 0,1 if you like? Just for you and others that have the same problem?

I did automatically program that, so its easy to change! Fixed formatting is attached below.

I have added the following code:

Today a small improvement on the Above Unity Member Calculator: 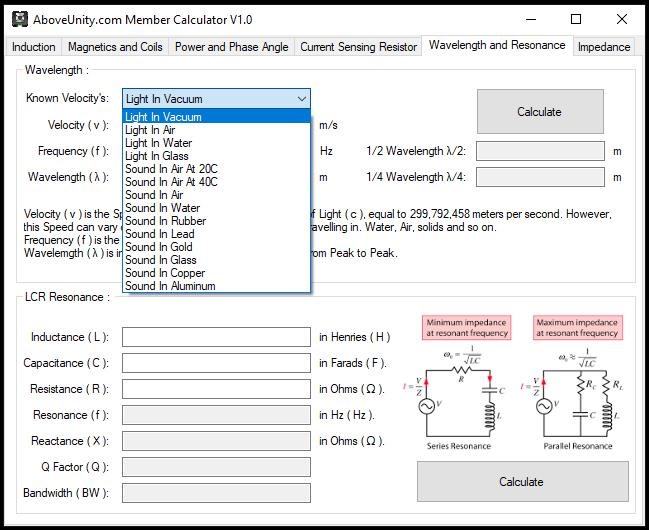 I have added some of the well known Wave Velocity's. Shown above is I think 14 Velocities, well known in Science. Not that most of them will ever be needed? I have made our most common Velocity default, the Speed of Light in a Vacuum:  299792458 meters per second, so this wont change, unless you change it. You can also set your own Velocity if required, its up to you to type that in if you need to?

Also, I have added Half and Quarter Wave calculation.

The updated Calculator is attached below, enjoy!

Thanks Chris
I just downloaded it.
Very appreciate. It will be usefull.

@Jagau, sorry My Friend, I just made another small change. 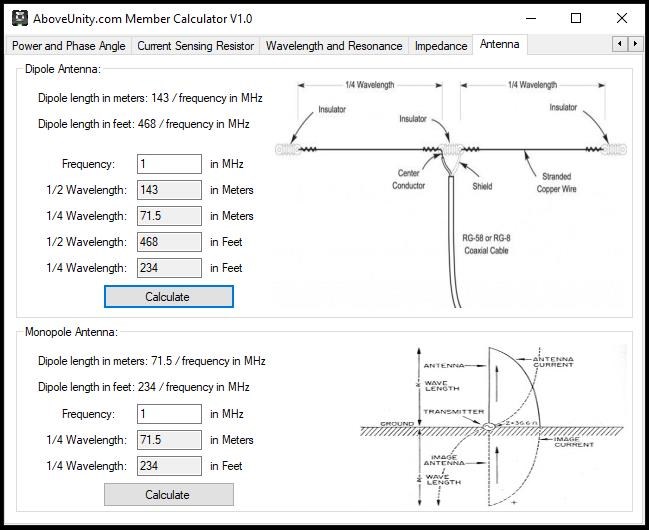 I have also changed and improved the RLC Resonance Calculator, now allowing for C to be calculated and an bug fix on the Q Factor: 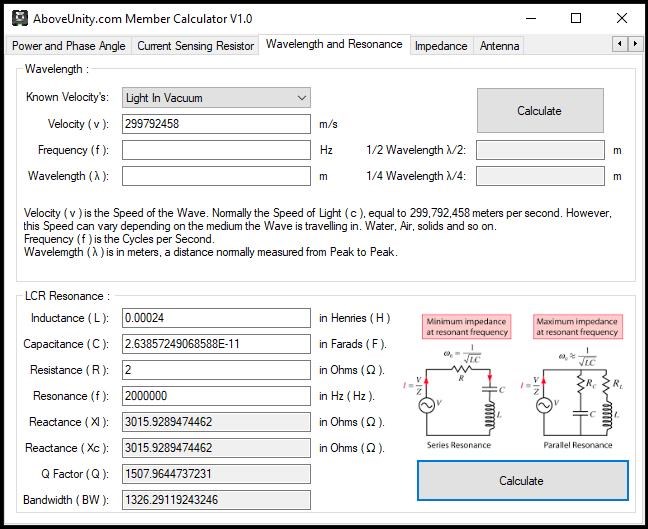 Attached below as always, enjoy My Friends:

I have a little question if that doesn't give you too much of a problem, could you add another quick calculation in the speed of light tab? It is one that I use very often, those of Tesla wave pi / 2 or 1.54 just if you can like that would be complete for me.
thanks again

Yes for sure, can you please send me a link to a resource, so I can learn more about this? I want to get this right and don't want to just add any old calculation that's not right.

For shure my friend

i learn a lot in this wonderful site

To clear up my confusion, you want Wavelength λ from π/2 C. is this right?

In other words, another textbox with the equation for Wavelength of Tesla Wave: 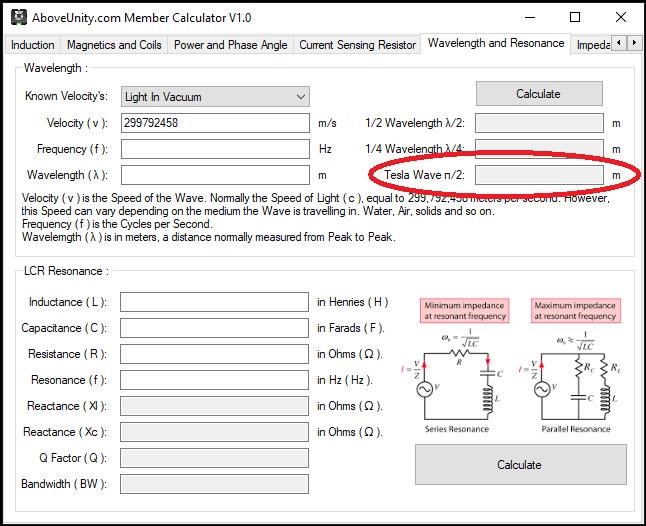 It was just a suggestion. Don't feel obligated by this.
Tesla contradicted Einstein's theory of relativity with his patent
787412, as irrefutable proof that there are faster than lambda.

Thas why we call this Tesla wave.

Do you want a complete Calculator for this? Or just Wavelength?

Its no problem, its easy, just want to make sure I am adding something that will be of use.

Let me know if you need changes: 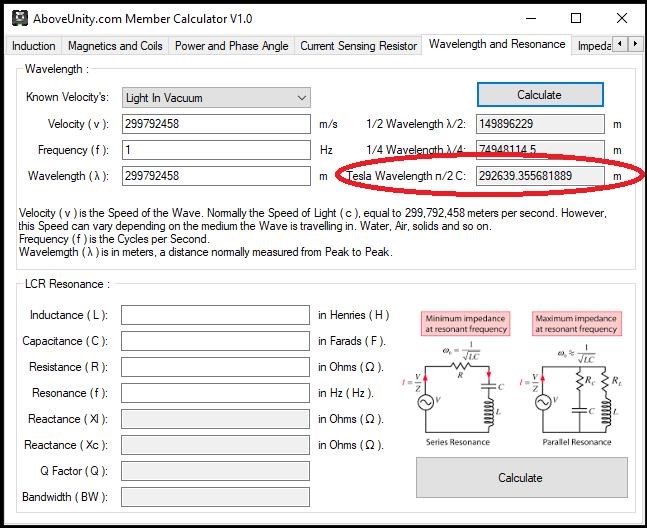 Not sure I should be using Miles per second? Kilometres per second might be better option? Make sure the Units are right?

It work for me

Thank you for your time

Let me know if you need to change it?

This is one of the better articles I have found on this matter:

“The mode of propagation can be expressed by a very simple mathematical law, which is, the current at any point flows with a velocity proportionate to the cosecant of the angle which a radius from that point includes with the axis of symmetry of wave propagation. At the transmitter, the cosecant is infinite; therefore, the velocity is infinite. At a distance of 6,000 miles, the cosecant is unity; therefore, the velocity is equal to that of light. This law I have expressed in a patent by the statement that the projections of all zones on the axis of symmetry are of the same length, which means, in other words, as is known from rules of trigonometry, that the areas of all the zones must also be equal. It says that although the waves travel with different velocities from point to point, nevertheless each half wave always includes the same area. This is a simple law, not unlike the one which has been expressed by Kepler with reference to the areas swept over by the radii vectors.” -NT

While experimenting in Colorado Springs at the end of 1899, Nikola Tesla sent electrical energy around the earth faster than the speed of light. In his patent No. 787,412 titled the “Art of Transmitting Wireless Electrical Energy Through the Natural Mediums" filed in 1900, Tesla showed that the current of his transmitter passed through and around the earth at a mean velocity of 292,815 miles per second. Many electrical experimenters have since proven this velocity including Jonathan Zenneck and Arnold Sommerfeld. The mathematical equation to this velocity of electrostatic induction, theorized by Charles Wheatstone, is (Pi/2)c

So how did he do this?

In his experiments he discovered that the earth as a whole had certain periods of vibrations, and by using his large oscillator could impress electrical vibrations at the same periods upon it creating more energy within the earth. This process is known as constructive interference. When Tesla’s oscillatory wave matched the frequency and phase of the earth’s natural vibration, the amplitude of the two are increased. By doing this repeatedly and using massive amounts of energy, Tesla was able to throw the globe into oscillations of such magnitude that massive amounts of energy were created and transmitted around earth and back to his reciever.

Witnessing this experiment, space, according to Tesla, was completely annihilated. This meant he could potentially throw the globe into oscillations of such greatness that enormous amounts of energy could be created, collected, and transmitted to any point on earth regardless of distance. Tesla’s system would literally turn the entire globe into a reservoir of energy which could be used for both power and communication.

Tesla held, however, that the wireless technology used by other engineers of his time - the same technology we use today - is purely radiation through the atmosphere while his system uses induction and gives off no radiation. Tesla’s electricity is stored within the earth like a capacitor and is completely recoverable, while today’s wireless couldn’t power a watch.

Therefore, it seems like we’re still behind the times, and the genius Nikola Tesla is far, far ahead.

EDIT: I must say, I have not seen this before, and not see a single mention of it in Tesla's Patents. If someone would like to point me to any references where the Great Nikola Tesla actively used these ideas, I would be very much appreciative. I have looked in Patent 787,412, and not found reference to this artifact? Odd?

Third. The most essential requirement is, however, that irrespective of frequency the wave or wave-train should continue for a certain interval of time, which I have estimated to be not less than one-twelfth or probably 0.08484 of a second and which is taken in passing to and returning from the region diametrically opposite the pole over the earth's surface with a mean velocity of about four hundred and seventy-one thousand two hundred and forty kilometers per second.

if you take lambda by PI over 2 you get what Tesla describe in his 787412 patent.

I called this faster than light without doubt,as you said the great tesla was a genius.

I will study this section in more detail! Not had my Coffee yet.

EDIT: Dur, I should have seen that! Sorry my friend, it is now more than obvious now you point it out! Thank You!

It's amazing the time difference when you think about it.

Have a good coffee my friend, it's time for the evening meal for me. Unbelievable.

Hello, I would like to express my sincere thanks for sharing this software.
In the hope of increasing progress in science

It's Very Help to me thank a lot